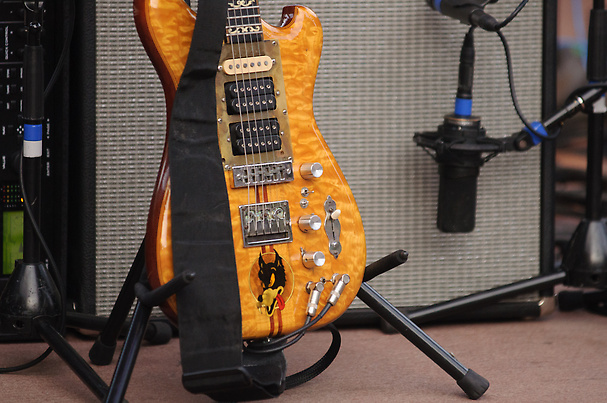 Once again, Haynes was playing Garcia’s main ’70s guitar, The Wolf, a guitar built by luthier Doug Irwin that Garcia used from 1973-1979. Garcia’s tone during that period was also shaped in part by a Mu-Tron III envelope filter pedal. Some people refer to these pedals as an auto-wah. Regardless, Haynes had something similar in his effects rack on Sunday, and the combination really nailed the classic Garcia ’70s tone.

Opening with a riff on “Dark Star” that didn’t have vocals, the band quickly moved into a dreamy “Bird Song.” During “Shakedown Street,” the CSO horn section really stepped to the fore, adding great weight to the jam out of the final guitar solo, while the string section’s silky, sweeping, singing fills were perfect on “Doin’ that Rag.”

One of the challenges of playing rock music with a symphony is coming up with good arrangements. Let’s face it: for orchestral musicians, the mostly rudimentary melodies and chord progressions of pop music aren’t very challenging to play. Pairing that with an electric rock ensemble can be difficult, but good arrangements, such as the string arrangement on “China Cat Sunflower,” can make the pairing work very well. On a symphonic break at the end, the orchestra seemed to be teasing a melody somewhat similar to “Nights in White Satin.”