The entire Gov’t Mule family is deeply saddened by the passing of longtime crew member Brian Farmer this past Sunday August 24, at his home near Nashville. Farmer died peacefully in his sleep. He was 53.

"He was a close friend, a devoted worker, and a lover of life,” says Warren Haynes. “We traveled around the world together and shared many experiences-mostly while laughing. He will be missed by a huge circle of friends and family."

Farmer began working for Gov’t Mule in 1998, brought to the band by his old friend, bassist Allen Woody, who died almost exactly 14 years earlier. Prior to joining the Mule crew, Farmer worked for Johnny Cash for eight years before the Man in Black retired from touring. Farmer was exceedingly proud of his close relationship with Johnny and June Carter Cash.

“When Johnny retired, I ran into Allen and said, ‘You need to hire me, you need to hire me,’ Farmer told Hittin the Note magazine.
Months later, Gov’t Mule needed a guitar tech and Woody called his old friend. In the subsequent years, Farmer became an indispensable part of the operation, teching Warren Haynes’ guitars and also serving as the band’s equipment manager and stage manager.

Farmer has been by Haynes’ side for every gig the guitarist has played since 1998 – with Gov’t Mule, the Allman Brothers Band, the Warren Haynes Band, the Dead, Phil and Friends and others.

“We have looks that we give each other,” Farmer told Hittin the Note. “An eyebrow, a flick of the wrist… a shrug of his shoulders …I've learned to listen for things. I can tell sometimes when he's close to breaking a string. With the Mule, I sometimes come out to adjust his amplifier before during and after songs.”

"He was one of a kind,” says Haynes. “He lived and breathed his job. He knew a lot more about guitars and gear than I did so I could trust him to keep things working in a technical manner so I could concentrate on the music.”

Says Allman Brothers Band manager Bert Holman, ”Brian was a very dedicated, very loyal, very skilled technician. He was from the old school and would help anybody and everybody do their job. If something of Derek or Gregg’s blew up, he’d be the first guy to grab a flashlight or tool and run across the stage because he was a team player. His standard line to any request was, ‘Just tell me what you need.’ Brian always had your back. He was kind to the fans and tried to give them as much time as he could without taking his eyes off the ball, which he never, ever did.”
“He was extraordinarily dedicated to his craft, to the world of guitars and amps, to Warren and all his projects – and to the music itself,” says Alan Paul, author of One Way Out: An inside History of the Allman Brothers Band.

“Guys like Brian keep the wheels turning and the gears greased and the guitars in tune. The shows don’t happen without them – and no one did any of this better, with more dedication, heart and soul than Farmer. His passing is a tremendous loss on many levels.”

Farmer’s death was greeted with shock and grief across the internet by fans and musicians alike. It is hard to imagine many other rock and roll road crew members who were more respected and beloved. Among those expressing their sorrow and respect on Twitter were Phil Lesh - "Fare thee well, Farmer. I love you more than can words can tell” and Derek Trucks, who summed up the thoughts of many when he wrote:
“People like Brian Farmer are the backbone of all live music. Without the hard work of folks like Farmer we'd be lost.”

He's survived by us all: His family, all of the musicians whose lives (and guitars) he touched, the road crews he traveled the country and worked tirelessly with and everyone else whose lives who were made better by his presence. 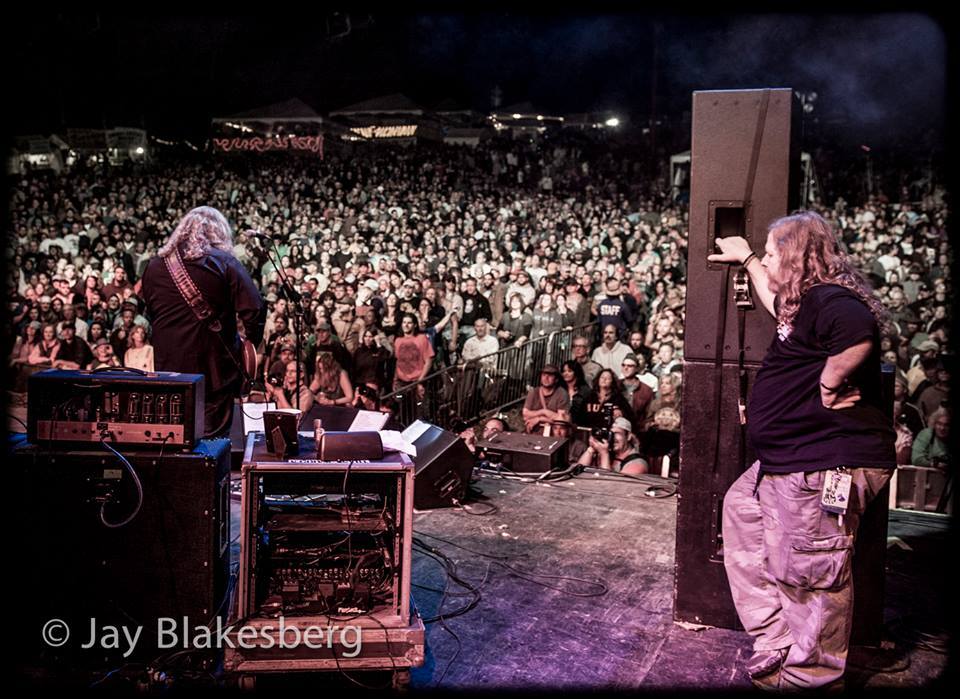