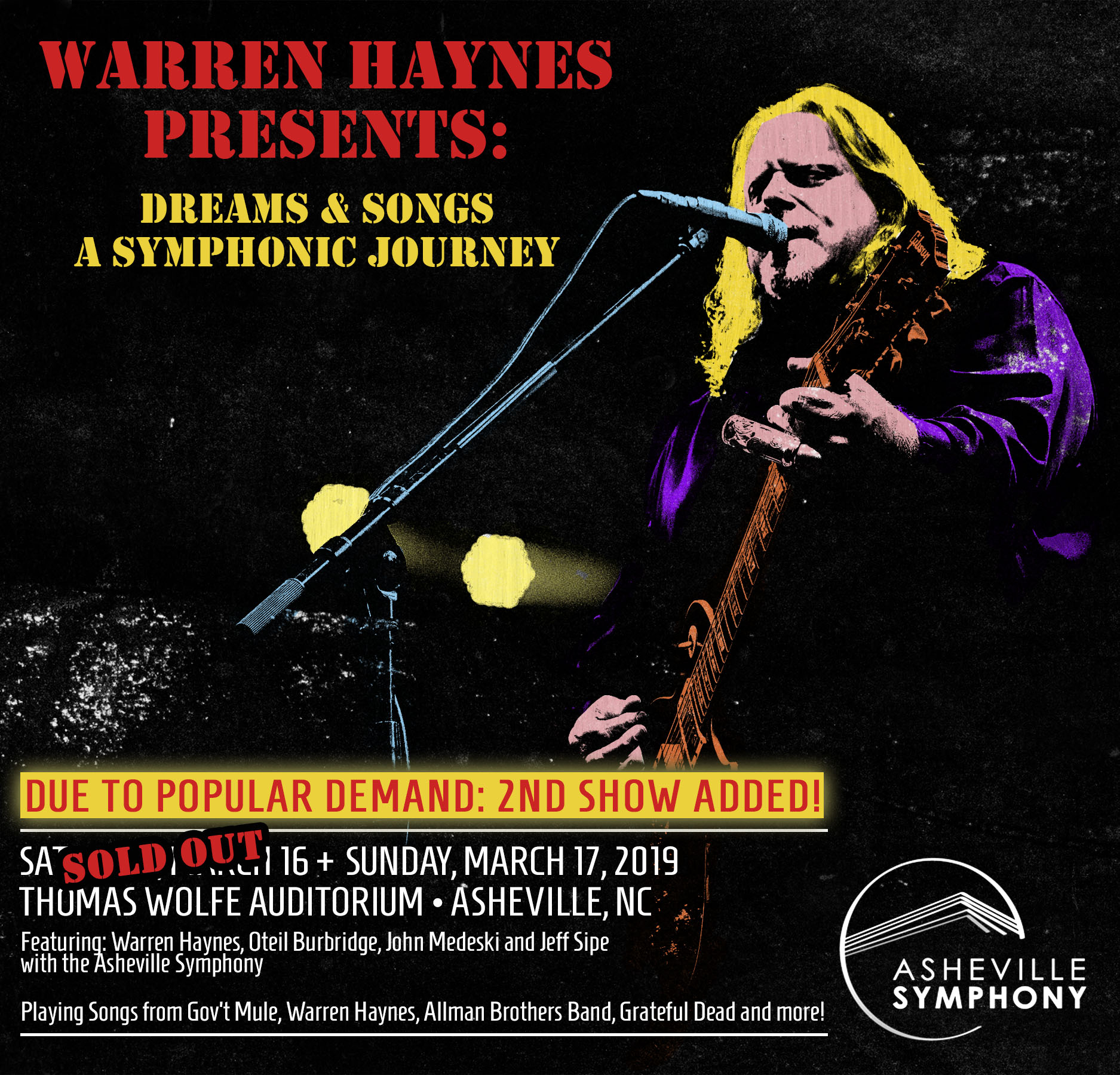 Due to popular demand, GRAMMY Award-winning vocalist, songwriter, producer and revered guitarist Warren Haynes has added a second Warren Haynes Presents: Dreams & Songs – A Symphonic Journey show set for March 17th at the Thomas Wolfe Auditorium in Haynes’ hometown of Asheville, NC. The original March 16 th date sold out so quickly that Haynes is turning what was going to be a one-night-only show into a special two-night event. This weekend of world-class musicianship will kick off the Asheville Symphony’s 2019 Asheville Amadeus festival, a 10-day multi-genre Mozart-inspired event fit for all tastes and ages, and will see Haynes leading symphonic adaptations of songs spanning his vast repertoire including tunes by Gov’t Mule, Allman Brothers Band and Grateful Dead as well as music from Haynes’ solo catalogue and several surprise covers.

For both shows, Haynes will team up with the Asheville Symphony along with Oteil Burbridge on bass (Allman Brothers Band, Dead & Co., The Aquarium Rescue Unit), John Medeski on keyboards (Medeski Martin & Wood, Phil Lesh & Friends) and Jeff Sipe on drums (Aquarium Rescue Unit, Leftover Salmon). Rich Daniels, the versatile musical director of The City Lights Orchestra in Chicago and music director for FOX’s hit show Empire, will conduct. Daniels has appeared with some of the greatest names in music including Ray Charles, Garth Brooks, Dionne Warwick, and many more.

"We are so excited that the show sold out so quickly and we are happy to announce that we are adding a second performance. I am really looking forward to these shows and am so lucky that three of my favorite musicians in the world will be joining me - Oteil, John and Jeff. This is a project I've been thinking about ever since I was given the opportunity to interpret and celebrate the music of Jerry Garcia with a symphony a few years ago. When I was asked to perform at the Amadeus Festival it seemed like a great time to start diving into my own repertoire and continue my symphonic journey."